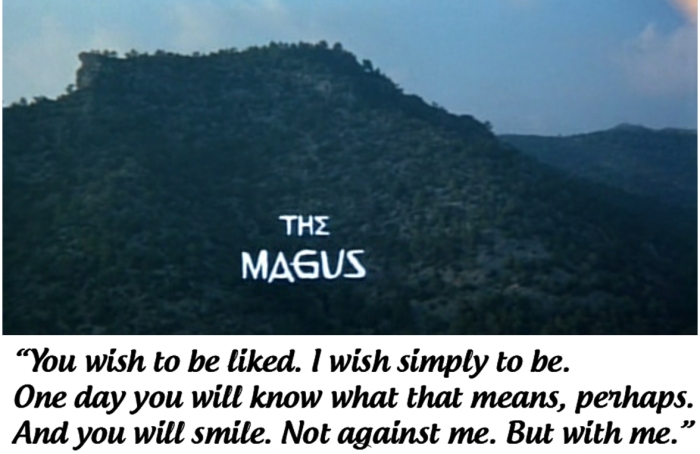 Before anything else, I hate giving spoilers especially about books because you directly interfer to people’s imagination and subconscious. Even though in the movies it’s all about visuality. So please do not read this post if you haven’t read this magnificent chef d’oeuvre. I’m not going to tell all about the book or characters, their details or events but some of the inferences of my review may highly affect you somehow.

I mentioned it here before that when I read a novel I always have a casting process in my mind for the characters. If the writer gives well portrayed details, I’m the happiest! I looooove using my imagination and forcing myself to create every single detail in my mind. ( This is why an adapted movie is always a disappointment for an imaginative reader ). Unfortunately, there is a movie adapted from the novel The Magus in 1968. Not by judging the rating it has on IMDB but by only feeling, I can say  the movie is going to be a big disappointment for me.

Our antihero, Monsieur Urfe… Ok, he was  English and snobbish. This may seem really irrelevant  but Alex Turner ( yes, the singer…) was my Monsieur Urfe during 700 pages. Though he was blonde and played by Michael Caine in the movie.

Monsieur Urfe’s biggest regret ; Alison Kelly. I think you can guess the name; Alexa Chung. Please don’t laugh because the only woman on earth that suits Alex Turner is her. So I couldn’t imagine him without Alexa!

Lily or Rose de Seita, the women you’d hate most. Actually I couldn’t find an exact name for the twin sisters but I suppose Brooklyn Decker can handle with Lily’s insincerity.

We can say our protagonist Nicholas Urfe is dragged to his personal hell by the psychological and illusional games played by Maurice Conchis and his “friends”,  who was introduced us as a worldly wise, wealthy man. These games are dangerous and serious. At some point, it becomes really hard to distinguish the fantasy from reality.

The book is 700 pages but there isn’t any chapter that you don’t end with a “WTF!” It’s totally fluent and It keeps dragging you deep page by page. There are far too many allusion and excerpt about Greek mythology, English and French litterature. Even Chienese and Japanese culture.
I love reading books that make me “think”, make me put myself in one of the characters and make me find something for myself or my life. But this novel makes you “feel” it.

When Urfe meets the next “victim” of the “Godgame”, I was kind of jealous about John Briggs. I was jealous about the story in which he’ll be involved, the games he’ll be played to… And I’m sure Urfe was also jealous. Every time Urfe belives that the game ends and was deceived one more time, I felt his anger and his despair…

I’m still not sure  if I’d ever want to be in Urfe’s place and have the opportunity to have my life dissected in such a way.

It’s a long book but as I said it’s hard to put it down and leave that world John Fowles has created.